I like using comparables when talking about prospects, it gives me a possible trajectory for the future. Blame Bill James. I marked a bushel for Jesse Puljujarvi this time last year—William Nylander, Mikko Rantanen and David Pastrnak—but a lot of people had those names when going in search of Jesse’s brothers. Statistical matches are fun, and are accurate sometimes. What about stylistic matches? What about situational matches? Interesting idea.

MACT AND THE HEMMER

It’s my experience that when a decade passes without agreement, we’re either talking about Middle East peace or an Edmonton Oiler. There was a time Ales Hemsky could part the Red Sea with his ability to divide people on the simplest issues–especially Oiler fans.

Ales Hemsky was supremely skilled, and delivered excitement during a period where there was very little. The one time he had a chance to play on a really good team he led that club in points and then had a terrific playoff run.

Hemsky arrived as a Czech playing in the QMJHL and by his second training camp Craig MacTavish didn’t want to send him back. The young Hemsky had much to learn away from the puck but he was talented offensively (MacT made several bets during his coaching career on offensive players) and from the fall of 2002 he was in the NHL when healthy or not locked out.

MacT gave him 9:26 (evens) a night (6-15-21) as a teenage rookie, 59 games. Hemsky got 2:36 on the PP (0-9-9) and he earned more time in year two: 11:13 (evens) and 2:42 (power play). A funny thing happened before year three, the NHL cancelled the season. Hemsky played in his hometown Pardubice, and when he returned, MacT released the kraken: 11:38 evens, 5:03 power play, 18 minutes a night. Hemsky led the team in scoring, delivered some memorable postseason moments and the two men shared their career highlight under the same sky. Hemsky was 22 that season.

The year away from each other might have helped, time away and the absence of alternatives (Edmonton didn’t have anyone like Hemsky, at least during the regular season) clears the mind.

I don’t know that Todd McLellan and Jesse Puljujarvi are ever going to go fishing together, but McLellan doesn’t have a lot of good alternatives who offer what JP brings. At 20, Hemsky was getting 11:13 a night at even strength. Jesse Puljujarvi? 11:09. You can look it up.

Per Todd McLellan, Tobias Rieder left the game with an upper-body injury and will be re-evaluated tomorrow.

Rieder is out for a month, give or take a weekend. That’s a blow, because the team was running on 13 forwards and Cooper Marody is a flat out rookie. Edmonton’s recall is another man who doesn’t have NHL experience, although Patrick Russell (photo by Mark Williams) is in the final year of his entry deal. I was going to write about the PK options (I use SA/60) but Sunil Agnihotri did that and more here. 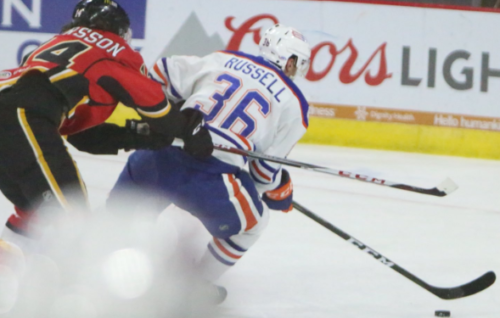 Patrick Russell got the call yesterday, he’s up to the NHL for the first time in his pro career. I love these stories, and in the case of Russell it all started in Holte, Denmark, which is a suburb of Copenhagen. I’ve seen him several times as a Condors forward and he’s a good penalty killer, can score shorties, anticipates well and is a throwback type in that he’s where you expect him to be most of the time. McLellan will like him. 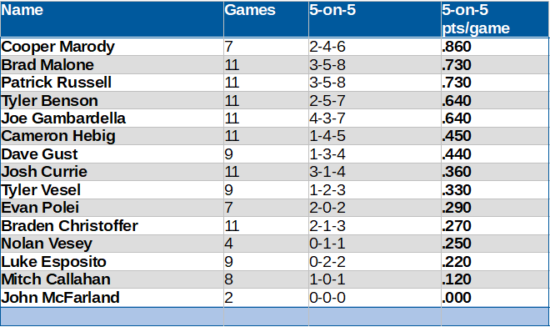 I’ll begin my ‘winter top 20’ at The Athletic tomorrow, with the No. 1 prospect in the Oilers’ system. Damn near half the list is new, it’s a stronger list than a year ago. I hope you enjoy it, one of my favourite things to do each year, this is year No. 16 for the winter list. The first No. 1 prospect in winter 2003? Jarrett Stoll. As a throwback bonus, here is the winter top 20, 2004 edition:

A fun morning, we’re heading for the weekend and there’s much to discuss. At 10, TSN 1260, scheduled to appear:

It’s been one year since Tyler Yaremchuk joined the show, we’ll celebrate by playing the most famous moment of the last 12 months at 11:20. You don’t want to miss it! 10-1260 text, @Lowetide on twitter.

NOT A SQUARE TO SPARE

WHERE THE OLD WORLD SHADOWS HANG HEAVY IN THE AIR

287 Responses to "Smoke When I Drink"